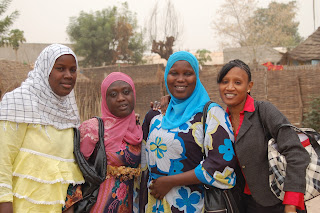 Senegal at last!
I joined the Peace Care efforts after taking a Global Health Solutions course with Dr. Dykens last spring during which time I was informed of the program’s work to decrease cervical cancer among Senegalese women.  My name is Magda, and as a Public Health student working on the outreach and communications end of Peace Care, I arrived at the airport in Dakar with an open mind, ready for what was thrown my way. The chaos and confusion outside of the sparse concrete building known as the international airport terminal was evident as we were greeted by our two Peace Corps drivers, as well as a group of congregating men hoping to help with our bags. Our friendly and courteous driver quickly loaded our luggage and promptly drove us along our long journey to Kedougou.
From my first impression, Senegal appeared to be a bustle of activity, even at 6 in the morning. Women carrying buckets of water, children walking to school and men gathered around motorized bikes lined both sides of the main road that we followed to Kedougou. Wild birds of all shape and size flew close to the ground, and we even had a glimpse of the Atlantic ocean as we made our way down the coast. Although I was not too excited about the toilets and their lack of sanitary equipment, my experience of Senegalese cuisine was much more positive.  We purchased and ate bean and spaghetti sandwiches, a surprisingly tasty breakfast snack. As city buildings and brightly colored mosques gradually gave way to huts with thatched roofs, the topography changed as well. Lush greenery evolved to open fields of bush, trees and animals grazing on patches of dried grass. We stopped for lunch at a local restaurant that served maffe (peanut sauce) and thieb u dien (fish with rice), both wonderfully spicy and flavorful dishes. After nearly 6 hours of driving, I woke up to a landscape much different than the one I had originally seen. Paved roads were being replaced by dirt roads, and orange, brown and yellow hues surrounded us along the dusty path to our final destination.
After 14 hours of traveling down roads while dodging potholes, cattle and bicyclists, we made it to Kedougou. We were warmly greeted by Leah, Meera, Marielle, LaRocha, and Ivy at the Peace Corps Regional House and shown to our charming huts where we would be staying the next couple of nights. After one last final meal at a surprisingly delicious restaurant that served excellent pizza and chicken, the exhausted Peace Care travelers went to bed excited for what’s to come tomorrow.
Magda Kupczyk, MPH Student
2012, Peace Corps, Senegal
Share Post: