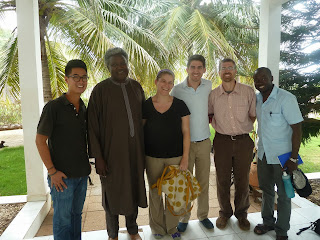 Date:10/19/2013
Author: Michael Charles, 4th year medical student at UIC
Photo:  the team with Dr. Kasse at his office
This is the team’s second day in the capital city of Dakar.  Early in the morning, Andrew, Cari, Paul, and I (Michael) headed to “Le Gondolier,” a nice medium-sized restaurant down the block from our hotel. The owners were gracious enough to prepare us some café-au-lait and delicious chocolate croissants a bit sooner than their opening time.

After breakfast, the team caught the cab to go visit a local friend of Andrew’s. She exemplified Senegalese hospitality well as she openly greeted us and invited us into her home. We shared bread, cheese, coffee and hot chocolate and pleasantly discussed aspects of life in Senegal, varying from health to family. As we have heard multiple times during our time at Dakar, diabetes tends to occur frequently in the population. Andrew’s friend even lost her father to complications of the disease. We also met her lovely daughter, who sang us a couple of tunes, one in French and the other in English.
The next order of business consisted of meeting Dr. Kasse a few hours later. He warmly welcomed us into his office, where we took our third round of café-au-lait of the day. As a gyne-oncology specialist, Dr. Kasse is well versed in all matters related to women’s health. He wears various hats in the realm of community health, and leads multiple successful endeavors throughout Senegal.  In addition to women’s health, Dr. Kasse spends a large amount of his time establishing a national program promoting smoking cessation. The team was delighted to have spent some time with yet another inspiring champion of public health. He will be working with us on the Kedougou project and we anticipate that he will be an invaluable contributor to our success.
The rest of day ensued with further tourism. Based on Chip’s (a Peace Corps Volunteer) recommendation, Paul, Cari and I went to explore Gorée Island. We took a ferryboat, from which we captured nice views of the island. Spanning 40 acres, the island offered a few historical landmarks. We visited La maison des esclaves (House of slaves). This was a sobering opportunity to revisit Senegal’s role in the Atlantic slave trade. At nighttime, we reunited with Andrew and Chip for dinner and music at a restaurant named Just 4 U, where the team got to try “thiof braise,” among other seafood delicacies.
2013, Peace Corps, Senegal
Share Post: